Elpro Seabird is designed for optimal workflow, functionality and visibility. Illustration: Elpro.
Havila Voyages’ four new cruise ships are currently being equipped with tailor-made aluminum bridge consoles from Elpro. From 2021, the vessels will sail along the Norwegian coast – from Bergen to Kirkenes – powered by green hydropower and natural gas.

– These are vessels the Norwegian people will recognize as they sail the traditional Coastal Route between Bergen and Kirkenes. It is a venerable assignment delivering the bridge consoles – the very throne of the ship – for such an iconic project, says Hans Marius Mauseth, Sales Manager for bridge consoles and mechanical products at Elpro.

ALUMINUM BRIDGE CONSOLES
Havila Voyages’ new cruise ships will be the most environmentally friendly vessels in traffic along the Norwegian coast. The ships are equipped with the world’s largest battery packs, enabling them to sail noise- and emission free through vulnerable fjords for up to four hours. However, the ship’s large battery packs for the hybrid engines, significantly increase the ship’s weight – which is why weight-saving solutions were installed throughout the rest of the ship. One such solution was aluminum bridge consoles.

Our bridge consoles are highly customizable, and specially adapted to the requirements of the ship and the crew.

Mauseth says that producing the consoles in aluminum reduced the weight of the bridge console by about 50%.

– Reduced weight is especially useful for electric- and hybrid vessels, where large battery packs drive up the total weight of the vessel. This applies to both smaller service vessels and large cruise ships such as the Havila Voyages ships, says Mauseth.

Elpro has already delivered tailor-made bridge consoles for two of the four Havila Voyages ships. To ensure all functional requirements and technical standards and demands are met, the consoles are tailored by our experienced engineers at our factory, Elpro Solutions, in Selva.

TAILOR MADE FOR EACH PROJECT
Elpro has delivered their next-generation bridge console, Elpro Seabird, to the Havila Voyages ships. The Seabird bridge console concept offers a high degree of flexibility and a number of customization options. To ensure optimal function and operational capabilities, each console is tailor-made to fit each specific ship.

– At an early stage of all our projects we offer 3D visualization of the bridge concept. By 3D visualizing the project we make it easier for the customer to envision the end result and request necessary changes, says Mauseth.

Listening to the crew is important for us. 3D rendering the bridge at an early stage helps us adjust the bridge consoles so that they meet our customer’s demands.

He explains that most Elpro bridge console components can be customized; like finding the appropriate chassis, on which side of the chairs you want which instruments, the required equipment for your operations in terms of navigation, alarm, DP, lights, emergency stop and PA/ CCTV, and the size of your screens.

– We listen to the crew when designing our bridge consoles, to ensure they are tailor-made to fit, not only the ship but also the crew and it’s needs. The bridge consoles must meet all technical and functional requirements – while also ensuring a good working environment for the crew. Good ergonomics and comfortable working positions are important keywords.

– We are also more than happy to custom paint the bridge consoles in the shipowner’s brand colors at our top modern powder coating facility, offering a proper specialized and delicate expression, says Mauseth.

Ergonomics is an important part of all our bridge consoles. All our consoles are highly adjustable.

ERGONOMIC DESIGN
Elpro Seabird is designed for optimal workflow, functionality and visibility. This is achieved by making the working height of the consoles adjustable, allowing screens to be raised and lowered for increased visibility, and ensuring all instruments are mounted in such a way that the crew does not have to stretch to reach them. Moving around the bridge has also been made easier.

– Focusing on ergonomics, our bridge consoles have been designed, developed, and redesigned over the course of several years; the result is the Elpro Seabird console. Prior to the release of this console, bridge consoles were dismal and industrial, says Mauseth.

– Some manufacturers focus on allowing the crew to sit down all the time; our goal is to make our consoles more flexible, so that the crew can do as they best see fit. For example, we have adapted the entire Seabird-console so that the captain can stand amidships – a position which offers great advantages when navigating narrow waters, like Norwegian World Heritage fjords, explains Mauseth.

A SYMBOL OF THE GREEN SHIFT
When the new cruise ships from Havila Voyages are put into service along the Costal Route, they will be the greenest vessels sailing the Norwegian coastline. With the world’s largest battery packs aboard, the ships can sail completely emission-free for up to four hours. When the battery packs are empty, the ship switches to natural gas, which cuts CO2 emissions by approximately 25%. In addition, the hull is custom designed for maximum energy efficiency. The goal: Sailing with zero emissions.

– There is a lot of talk about protecting and conserving World Heritage fjords like the Geirangerfjord and vulnerable areas in the north. New requirements for emissions and sustainability are continuously brought forward; in this sense, Havila Voyages’ new ships are very progressive. These kinds of ships may one day become a necessity if cruise passengers are to see these special areas in the future, says Mauseth.

He adds that installing electrical systems of the size mounted on the Havila Voyages ships require a particular kind of special expertise. With more than 40 years of experience with main- and emergency switchboards for the maritime sector, our engineers and installers have acquired a unique skillset in this area.

Elpro has designed and delivered the switchboard solution for the four ships, on behalf of our partner for many years, Norwegian Electrical Systems (NES). You can read more about the delivery of main- and emergency switchboards here. 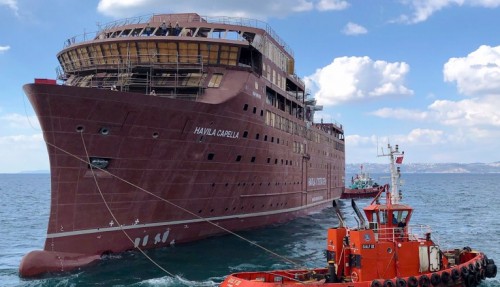 One of the four new cruise ships, Havila Capella, at Tersan Yard in Turkey. Photo: Tersan.