Live Fish Carrier has been delivered to Nordlaks

The 85,54 meters long and 19 meters wide vessel is unique with her propulsion system and her technologically advanced fish handling systems. With her two LNG deck tanks and four pieces of fuel conditioning systems, AKA TCS, Bjørg Pauline is a significant and fully redundant LNG powered vessel thanks to its very innovative design. The use of gas engines will give her a 30 percent reduction in CO2 emissions compared to a traditional diesel engine. The use of liquefied natural gas will also provide 90 percent reduction of the emissions of the NOx.

REMOVE SEA LIES
The vessel, having a cargo hold capacity of 4300 m3 is also equipped with fish treatment system to remove the sea lies from the fish. She is equipped with spacious and luxuriously appointed accommodation for the crew on board. Designed by NSK Ship Design and built under supervision of DNVGL, Bjørg Pauline will be one of the most efficient and most advanced vessels of her type. The second LNG-powered live fish carrier of the series named after Harald Martin is also under construction at our Shipyard and is planned to be delivered in 2021.

INTEGRATED FISH FEED SILOS
The Havfarm has integrated fish feed silos and a robust water injection system optimizing the oxygen level inside the net pens. The unit is dimensioned for a wave height of 10 m Hs. The unit has protective steel skirts reducing current effects inside the fish pens and together with overpressure from water injection system keeping sea lice outside the unit. The Havfarm also have accommodation for limited number of crew on board, but many functions like feeding are done from shore via redundant internet and wi-fi systems.

Havfarm is conveyed to Norway from China with a record breaking transport process. With the weight of 36.000 tons, Havfarm has been the largest construction ever transported by a vessel.

Nordlaks, who has been one of the biggest companies among the aquaculture sector and focused on development of new aquaculture technology, has made revolutionary investment with the construction of these two advanced live fish carriers and Havfarm which will proudly serve for offshore coastal fish farming industry.

TERSAN SHIPYARD
Tersan is one of Turkey’s largest new building shipyard employing about 5.500 people in two shipyards, in Istanbul and in Yalova with a track record of building more than 90 ships. The yard is specialized in building technologically advanced offshore, fishing and other types of vessels for their international customers, mostly from Northern Europe.

Tersan is a diversified shipbuilder whom has gained considerable experience in building of LNG and battery operated vessels besides number of value-added niche new-built ships of many types and sizes. Tersan has been awarded as the export leader of Turkey in its new shipbuilding sector seven consecutive years.
Bjørg Pauline will also be presented in Maritimt Magasin no. 5 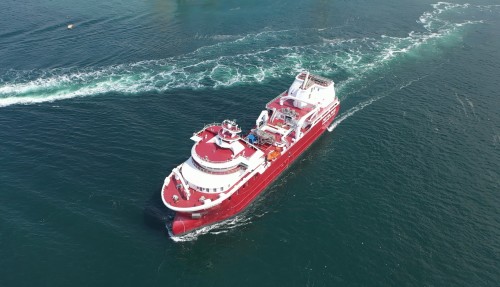 The use of liquefied natural gas will also provide 90 percent reduction of the emissions of the NOx. Photo: Tersan.