A new era in Cruise shipbuilding in China

Shanghai Waigaoqiao Shipbuilding
– RINA has signed an agreement with Shanghai Waigaoqiao Shipbuilding (SWS) for the classification of the largest ever cruise ship to be built in China. Speaking at the signing ceremony Mr.Wang Qi, Chairman at SWS said, “The Chinese cruise ship industry is expanding rapidly, and the new vessel is being designed to respond to that growth as well as Chinese tastes. China’s burgeoning economy is providing increased demand for leisure activities encouraged by the Chinese government, while its large geographic area and population promise sustained demand and no shortage of potential routes.”

With an overall length of about 341m and a gross tonnage of approximately 140,00GT, the cruise ship will be the largest ever built in China with a capacity of more than 6500 between passengers and crew on board.

NUMBER ONE IN THE WORLD
Mario Moretti, Asia Marine Senior Director at RINA, said, “The Chinese shipbuilding industry has been the number one in the world for some time. But this has historically been focused on merchant and cargo vessels. We are very pleased to be working closely with SWS in building China’s largest ever passenger ship. The agreement represents a milestone in Chinese shipbuilding as it expands into the passenger sector responding to the growth of sea-borne tourism.”

The cruise project will be built according to the highest standards ever applied in China for environmental protection with RINA additional class notations “Green Plus” and “HVSC” (High Voltage Shore Connection).

The expected delivery date of the vessel is December 2025. 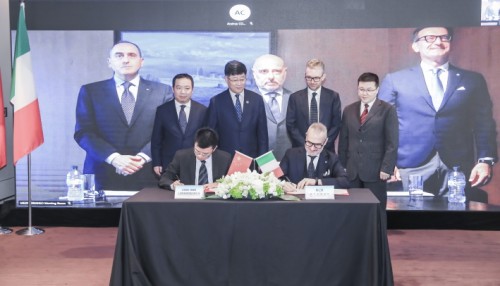