The Turkish company have developed the electric tugboat ZEETUG in a step to welcome a greener future. ZEETUG30 is expected to reduce CO2 emissions by 210 tons and NOx emissions by 9 tons a year.

Three more on their way

According to Navtek Naval Technologies, the project started with two seemingly straightforward requests. One of their customers, Gisas Shipbuilding, asked for harbor tugs that were both lower emission and smaller in size than its previous fleet. This request was driven by a need to meet stricter environmental requirements and an ability to navigate the tight confines of the Port of Tuzla, Istanbul, where they would operate.

Navtek worked with a variety of partners on the project, including BMA Technology (the electrical systems integrator), Corvus Energy (the battery supplier) and ABB (the drive and converter supplier). Currently, the company has two further 30-ton BP and one 45-ton BP ZEETUGs in its order book for Gisas.

Built at Navtek’s parent company’s TK Tuzla Shipyard, the first ZEETUG, Gisas Power, went into service this summer, operating in the shipyard zone at the Port of Tuzla. Designated as a ZEETUG-30 design for its 32 tons of bollard pull, the vessel has an overall length of 18.7m, beam of 6.7m, depth of 4.7m  and design draught of 3.5m, with a service speed of 10kts.

The electric tugboat draws its power from two 1,450kW lithium-ion battery packs supplied by Corvus Energy. For safety, the tug has two redundant battery rooms, one forward and one aft, which are maintained at a constant temperature by an air-cooling system.
Navtek have developed what they call a Smart Tug Energy Management System (STEMS), to optimize electric power consumption, analyze the operational profile and extend the range of the tug.
A dedicated quick-charging station (QCS) is also designed and built by Navtek. A full charge for the tug can be accomplished in one hour via the QCS.

Thanks to a modular system, the all electric and rechargeable battery-powered ZEETUG can be custom-built for any kind of operation needs from 5T BT up to 75T BP. 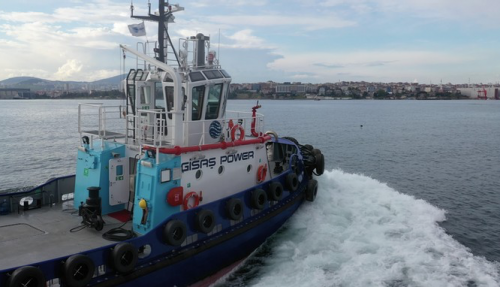 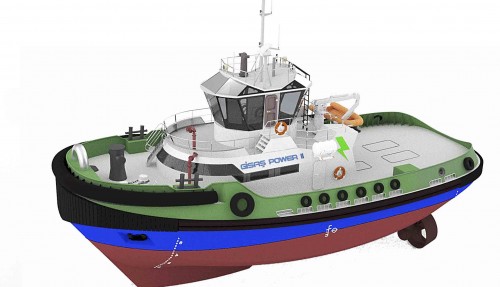